Now remember Maryland pedestrians you can't j-walk and you can't step into the crosswalk if the motorist cannot or will not stop. After all we are shooting for the #1 slot of having the highest pedestrian fatality rate in the nation. Go Maryland!
[/sarcasm]

The governor is asking residents to leave their cars in the driveway and try bicycling, walking, public transit, carpooling, or vanpooling, for Massachusetts Car-Free Week, Sept. 18-24. Massachusetts will join more than 1,000 cities in 40 countries to show the benefits of reducing the number of vehicles on the road.
Going car free on Sunday? Tell us how you will do it....

GreenDOT, a state program runn by the state DOT, aims to reduce greehouse gas emissions under Gov. Deval Patrick's 2008 Global Warming Solutions Act. This law requires a reduction in emissions of 25 percent by 2020, and an 80 percent cutback by 2050. Transportation generates more than one-third of the total greenhouse gas emissions produced in Massachusetts.

Every Sept. 22, cities and towns around the world promote car-free travel. World Car-Free Day began in Europe and has quickly spread as a way to promote the environmental, financial, community and health benefits of using public transportation, carpooling, bicycling and walking. Several U.S. cities hold events on World Car-Free Day; however, no other state in the nation has proclaimed a statewide Car-Free Day celebration. This year, Massachusetts will be celebrating an entire week of going Car-Free. 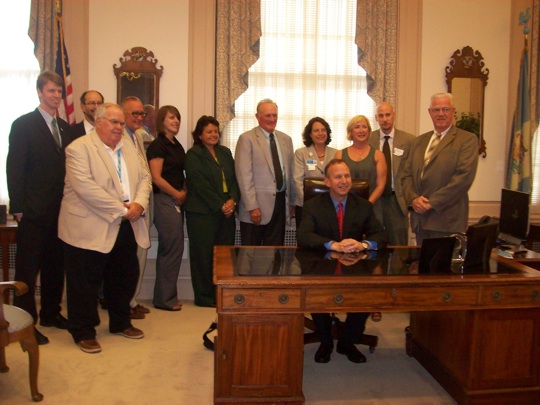 [B' Spokes: One of the issues I've been pushing is to get more info out there on how motorists are supposed to turn around bicyclists in bike lanes. The current road block: the law does not spell it out crystal clear that this is "required." Even though we have consensus this is the safe way to have motorists turn across bike lanes... hence this is posted in "News you will not see in Maryland."]
Rating: 0.00/5 (0 votes cast)

The crossover mirror, on the right, allows truck and school bus drivers to see in front of their hood. They will be required on large trucks driving on New York City streets starting next January. Photo: Moblog.

Momentum for the bill grew after a Brooklyn boy died when he was hit by a truck while riding his tricycle in Brooklyn.

''You can patrol an area silenty,'' Ross said. ''They have no idea the police are coming.''

Members of the unit, besides Ross and Miller, are officers William Ward, Michael Bodnar, Sonya Wilson and Shakir Perkins.

Ward said bikes gives officers chances to interact and stop crime they do not get on foot or in a cruiser.

''It combines the best of walking beats with high mobility,'' Ward said. ''You get to hear and see stuff you usually don't see.''

Ross said response has been positive. Mary Farragher and Amy Lisi, who help to run the Lemon Grove, both said they welcome the patrols.

The officer, Michael Fissel, was on routine patrol with another officer at 9:14 p.m. when he saw the man, Laquan Beatty, 19, of the 100 block of South Duke Street, leaving the backyard of a house in the 100 block of Lafayette Street and getting into a car, according to the police report.

Fissel approached Beatty and asked him about being in the backyard, the report said. Beatty appeared nervous, according to the report, and was apparently looking for a way to run.

The officer took him into custody and a search turned up $173 in cash and baggies containing crack cocaine and marijuana, the report stated.
Beatty was taken to Central Booking for arraignment Saturday morning.

[B' Spokes: Even though League of American Bicyclists rated Maryland above Delaware (MD rank 10 vs DE rank of 18.) And Maryland's Polices and and Programs were graded A vs Delaware's B. I'm still filling this under News you will not see in Maryland.] from Bikeleague.org Blog by Darren

Bike Delaware has scored a major victory. On Friday, the Delaware General Assembly voted to dedicate $5 million in new funding for bicycling in Delaware.  That’s “more money than the state has ever allocated before,” according to Bike Delaware’s announcement.

Bike Delaware launched their campaign to increase state funding for walking and bicycling this winter. “We recognized the desperate need for direct and strategic funding for bikeway infrastructure and we thought we had a chance of success,” Executive Director James Wilson said, “And we weren’t afraid to fail.”

Bike Delaware worked with several groups, including Delaware Greenways, the Delaware Bicycle Council and, especially, Nemours Health and Prevention Services, to generate support for the new funding. The turning point came, Wilson said, when Senator Venables, a senior and influential state legislator, agreed to write and champion the legislation. Then Governor Jack Markell, a bicycling supporter who once spoke at the National Bike Summit, provided crucial support for the bill. “In other words, Bob Venables loaded the bases. And Jack Markell hit a grand slam,” Wilson wrote in an email to Bike Delaware members.

We are thrilled to see that Bike Delaware is now undertaking a campaign to ensure that the $5 million is used as a local match to leverage federal funds. Federal funds typically require a 20 percent match, which means the $5 million provided by the state could mean $25 million for bicycling in Delaware. We at the League and Alliance for Biking and Walking – the Advocacy Advance Team – are excited to support Wilson and Bike Delaware to make this happen. This is a prime example of a savvy state group working aggressively to increase bicycling and walking spending and leverage federal investments.

Filed under news you will not see in Maryland. The highlight of the story:

When deputies questioned Cox, he said that he was driving to work when he approached a pair of cyclists who he believed were in his lane and not being considerate of drivers. Cox said that he drove close to the right shoulder and yelled at them, and then encountered two more cyclists and attempted to confront them about their cycling manners, according to the report.

Cox told deputies he stopped his car directly in front of the cyclists.

Police said based on the dangers of the Angeles Crest Highway - three motorcyclists have died in the last few weeks - and the potential for Cox’s actions to have caused a traffic hazard, they arrested him. Cox was arrested on suspicion of assault with a deadly weapon and booked at the Crescenta Valley Sheriff’s Station.