“By taking cars off the road and reducing harmful emissions and pollutants in our nation’s most natural and pristine settings, we’re helping Americans and visitors from around the world enjoy these public lands as they were meant to be enjoyed. From new pedestrian walkways and bicycle trails to energy-efficient shuttle buses, these investments help to keep our parks sustainable for years to come.”
...

...
This is the cognitive dissonance that says one group of people must vote for and fund their own lifestyle choices (urbanites who use transit); while another group gets their lifestyle choices funded by everyone.

I’m actually not at all opposed to the approach used for the streetcar line. In fact, I think that it’s a much fairer way to go about funding major transportation projects that require public dollars.

I simply wonder: why don’t we do this for every major project? The primary recipients of our largesse for the Grandview Triangle are people who live within about a ten-mile radius of it. What if they had to fund its rebuilding? Would those voters have chosen to raise their own taxes for this one intersection?
... 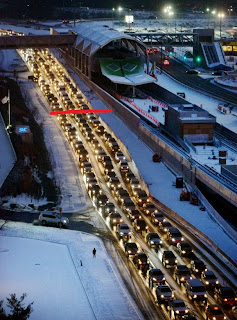 Richard Layman shows roughly how many cars can be taken off the roadway with 3 buses. I'll note that's roughly the space of 6 cars... big difference!

Relying on public transit in Baltimore makes me feel like Don Quixote, Ignatius Reilly, and "Ratso”  Rizzo all rolled into one. As a rare “choice” rider in this city—someone who could afford a car (albeit a crappy one) but chooses to walk and ride instead—I’m accustomed to ruling out activities in whole chunks of the city. I go out most nights, but this means allocating extra time in each trip for buses that never come, trains that creep at half the speed they could, and long walks to destinations that should have service but don’t.

It doesn’t have to be that way. Literally 100 years ago, Baltimore had one of the best streetcar systems in the world, covering more area and running more frequently than today’s nightmarish bus system. In fact, many neighborhoods of Baltimore were literally developed around streetcar service, built with little walkable commerce since residents could rely on public transit to get them anywhere they needed to go.

We’ve all likely heard about streetcars before, but pause for a minute to let this sink in: 100 years ago a pedestrian in Baltimore could get to more places, and make their trips faster and easier, than we can in 2013. What should’ve been a source of enduring health and pride for the city was demolished after WW2 in the name of “progress,” a gross capitulation to car culture, the suburbs, and corporate power that resulted in inconvenience to me, but real horrors for much of the city. The death of the streetcar led to the creation and exacerbation of food deserts, to name one dire consequence, not to mention a working-class populace that must choose between either building their daily life around an unreliable transit system, or becoming shackled to the barely sustainable expenses of car payments, insurance, gas, and repairs.

Baltimore is bouncing back from hard times. In so many quality of life measures that matter to me, things are better than they were when I moved here in 1996.  Despite a still-raging and horribly destructive drug war, most of our city is safer than it was then. Life is also potentially more enjoyable: we have more cafes, more clubs, more movie screens, more art galleries, more bike lanes, and a vibrant music scene that’s become internationally known.

Public transit lags behind. Why? ...

...
Unfortunately, it's generally hard to describe taking transit as &quot;fun.&quot; As a co-worker says, a big reason to ride it is that traffic is even less enjoyable. But why shouldn't transit riders get a kick out of the experience?
...

Nordahl says auto designers &quot;get&quot; this, since their job is to &quot;guarantee cars remain cool, chic and fun for the masses.&quot; I see this in my new car, which looks gorgeous on the outside while inside I get seat-warmers, satellite radio, GPS, a hookup for my iPod, settings for fuel-sipping &quot;ecodrive&quot; or a boost of speed for passing, and other features that make it fun to drive.

Transit should be such fun, so we feel attached to it emotionally as well as rationally. Now, to be clear as Nordahl is at the outset, you can't have &quot;fun&quot; without &quot;funding.&quot; Transit needs, and deserves, more investment from municipalities, states and the feds. While money is necessary, however, it's not sufficient for transit to compete. And Nordahl points out that design can help with funding since &quot;public transit alternatives that truly excite the public...tug our heartstrings while loosening our pursestrings.&quot;
...

The bottom line? It's high time we made public transportation as fun as driving.

&quot;But the four “roundtable workshops” for the 2035 Maryland Transportation Plan [MTP] are not scheduled in locations convenient to any mass transit. None are located in Baltimore city in a location where they might conceivably be served by trains, buses, light rail or the subway and where many transit users, cyclists and pedestrians live.&quot;


B' Spokes: MTA handles mass transit in the Baltimore area. Is MDOT saying there is no long range plans for mass transit or they are just not interested in public comment from people who use a state transportation system?

[Note: Baltimore handles all state roads in it's jurisdiction so some &quot;exclusion&quot; is understandable but not 100% on all topics. Baltimore metro area needs more input into this plan!]
Rating: 0.00/5 (0 votes cast)

There will come a time when it no longer makes any sense to put any money into the Red Line or Purple Line if the General Assembly wants to pretend we can fund our transportation challenges based on a 30-year-old flat tax on gasoline.